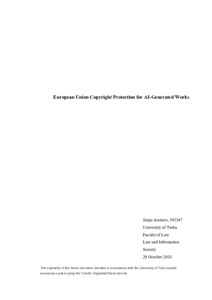 This thesis assesses the copyright protection of AI-generated works in the European Union. AI-generated work means a work of art that is generated independently by an AI system that relies on machine learning and artificial neural network technology in functioning. The human input in the creation process of an AI-generated work is non-existent. Today, the AI-generated works can be found in almost every copyrightable medium, such as in the field of music, art and literature.

The questions analyzed in this thesis are significant as the importance of AI-generated works in our society is constantly increasing. If the AI-generated works are not protected and the protection regime remain unclear, this will have a negative impact on investments. Consequently, the number of valuable works would decrease in the society.

This thesis focuses on the European Union copyright law and follows the traditional legal dogmatic approach. In addition, de lege ferenda approach is adopted in the second part of this thesis.