“A Cosy, loving pair”? – The Elusion of Definitions of Queequeg and Ishmael’s Relationship in Herman Melville’s Moby-Dick

“A Cosy, loving pair”? – The Elusion of Definitions of Queequeg and Ishmael’s Relationship in Herman Melville’s Moby-Dick 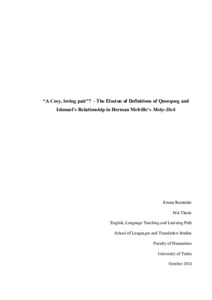 In this thesis I investigate Herman Melville’s sea novel Moby-Dick (1851), its depiction of the first same-sex marriage in American literature, and the way scholars have been unable to define the relationship of Queequeg and Ishmael as romantic, sexual or queer. Even though Melville writes that Ishmael and Queequeg, a white man from New England and a prince from an imaginary Polynesian island, get “married,” the relationship is often regarded as a buddy narrative. Queequeg, regardless of the ways in which he avoids the stereotypical noble savage characteristics and remains his own man, is seen as inferior to Ishmael, which seems to suggest that the relationship cannot be equal enough to be romantic. Although defining the relationship is seemingly difficult, the imbalance of power has led to scholars to define it as unromantic.
The analysis of my thesis focuses on Moby-Dick and how the novel makes the omission of definition possible. In addition to that, I investigate the context of Moby-Dick closely. I look into the description of Ishmael’s whiteness as well as the tradition of depicting the Stranger in the Western literature of the nineteenth century. I examine the birth of modern homosexual identity and the lack of it at the time of writing Moby-Dick. I look into the reputation of Herman Melville as the Great American writer and consider the ways in which this has affected the understanding of Moby-Dick over the years, especially the reading of the novel as a love story. I study the historical connection between homosexuality and cannibalism and look into Melville’s way of using cannibalism as a symbol of homosexuality. I investigate how queerness and non-white identity are nowadays considered as mutually exclusive: how queerness is seen as a dominantly white identity, and how this makes recognizing Queequeg as a queer character more difficult. I discuss the similarities between queer and non-white identities of today and examine how that in turn has affected queer readings of Moby-Dick.
I argue that Queequeg and Ishmael’s different ethnicities make it possible for scholars to deny their queerness. Because of the status of both homosexuality and people of colour in the 19th century as well as in the 20th and 21st century, these identities are seen as demeaning and therefore applying them for 19th century characters is regarded as anachronistic and even offensive. The intersection of race and queerness creates a sort of paradox. Without Queequeg being the other, Ishmael could not fall in love and escape the boundaries of society with him. However, at the same time, the fact that Queequeg is the Other makes it possible to always dodge the label of queer; he marries Ishmael because he is the racial Other, not because he is queer. In my thesis, I aspire to break that paradox and make further queer readings possible.