Astrospeak in turns : Minimal sequences of conversation in institutional talk 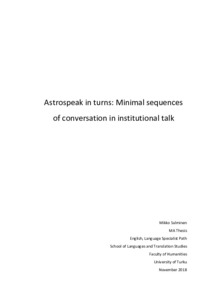 Interaction in many professions or institutions has led to the development of domainspecific language varieties, or registers. To distinguish these forms of language from other, everyday registers, linguistics has grouped them as Languages for Specific purposes (LSPs). The thesis focuses on the LSP used by the Apollo astronauts and mission control during the US Moon landing program in the late 1960’s/early 1970’s. The data used are the transcripts of the Apollo 12 air-to-ground transmissions from 1969, accessible online via a NASA website. The data is described using register analytical approaches provided by Biber & Conrad (2009). Additionally, institutional constraints and radiotelephony (R/T) are discussed as restrictive factors for talk.
The thesis concentrates on the sequence organization of the language variety, named Astrospeak by the author. More specifically, the thesis employs the methodologies of conversation analysis (CA) to explore the minimal sequence structure of Astrospeak. A minimal sequence refers to the unexpanded base form of sequence which is constructed out of turns, and whose organization is the foundation for interaction. In addition to examining the minimal sequence structure of Astrospeak, the thesis questions discuss the nature of the interaction in relation to the two research approaches for conversation: CA and Institutional CA (ICA).
The hypothesis is that Astrospeak favors a three-turn minimal sequence structure. This follows the findings of Kevoe-Feldman & Robinson (2012). Using common CA frameworks amended with institutional considerations, the analysis shows that Astrospeak does take a three-turn minimal sequence when initiated with an open question. Conversely, if no tangible information is produced in the response turn, a third turn is not triggered. The presence of the third turn is due to institutional and R/T constraints.
The thesis is the first linguistic study of Astrospeak. In addition to exploring the sequence organization of the interaction, the thesis suggests that ICA-specific frameworks could help theoretically differentiate LSPs from ‘ordinary’ talk. For that, the concept of procedurality is discussed as a descriptive tool for further research.