"The Wolf May Be More Than He Seems" : Wolves and Werewolves in Angela Carter's "Little Red Riding Hood" Stories 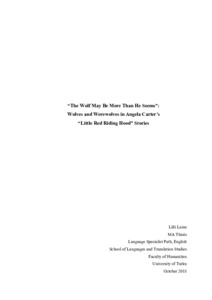 In this thesis I examine three short stories by Angela Carter: “The Werewolf,” “The Company of Wolves” and “Wolf-Alice”, included in the collection The Bloody Chamber (1979). They are all versions of the traditional European fairy tale, “Little Red Riding Hood”, which originated in medieval Italy and France as a coming of age story celebrating the independence and resourcefulness of peasant women. I am interested in what the different figures of wolves come to symbolise in Carter’s stories. I argue that there are only few natural wolves to be found in these tales – the rest are werewolves or lycanthropes. These creatures have different roles in each story.
As a feminist writer Carter believed that by rewriting canonical European fairy tales she could restore a voice to those women history has traditionally silenced. She is particularly interested in the social constructedness of gender. I examine how Carter utilises the framework provided by the fairy tale genre and how she employs historical knowledge in her writing in order to challenge established truths and centuries of both misogynistic and anthropocentric thinking. My own approach is thus mostly influenced by feminist research, but I also draw on posthumanism, ecocriticism and psychoanalytic literary theory. I believe such an interdisciplinary approach to yield more substantial results.
Through her rewritings Carter presents the wolf and werewolf as allegories for different phenomena. The first story, “The Werewolf”, examines the vulnerability of old women and the misogynist and ageist attitudes common in fairy tale tradition; the werewolf accusation merely provides the justification needed for the eradication of a weakened member of the community. The second story, “The Company of Wolves”, employs the werewolf as a metaphor for the female libido and explores the attempts to control female sexuality and mobility through fear in a male dominated society. Carter’s protagonist rejects the narrative of female victimhood and instead embraces the threatening animal, that is, accepts her own sexuality. The final tale, “Wolf-Alice”, questions traditional perceptions of human exceptionality by exploring the boundaries between humans and animals. The story also challenges the notion of human language as the prerequisite of consciousness, thus granting the possibility of selfhood to other animals as well.