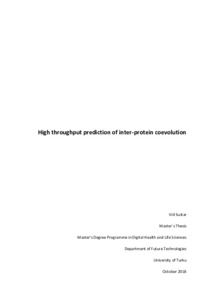 In this work, I have developed automatization for a protein-interactome screen done by proximity labelling of B cell receptor and plasma membrane associated proteins under activating or non-activating conditions. Applying high-throughput co-evolutionary analysis to this data provides a completely new approach to identify new players in B cell activation, critical for autoimmunity, hypo-immunity or cancer. Results showed unsatisfying performance of CAPS, explanation and alternatives were given.