Gender discourse on politicians in news writing : a corpus study 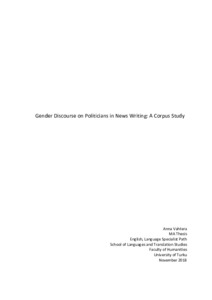 This study examines gender discourse in newspapers’ coverage on male and female politicians. Newspapers have an important role in creating and maintaining gender discourses, perceptions on gender and gender stereotypes, since they are considered a trustworthy source of information by large audiences even in the current time, where the traditional media are experiencing a decline in their popularity. Therefore, it is important to examine critically the word choices newspapers make when they report on leading political figures, since these choices can hide gender bias and affect the readers’ perceptions.

The results do not suggest any remarkable gender bias in the news coverage of these four politicians. One of the hypotheses was that there would be more words related to appearance and family when the female politicians were reported on, but this was not the case. The other hypothesis was that the verb choices and their transitivity would reveal gender-based differences, but the differences found were more likely related to the subjects’ individual characters. In future research there could be more study subjects in order to receive more generalizable results, and to find more aspects related to gender. There are also prospects for using multimodal research methods, e.g. multimodal corpora.