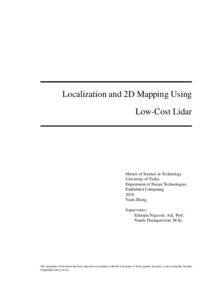 Autonomous vehicles are expected to make a profound change in auto industry. An
autonomous vehicle is a vehicle that is able to sense its surroundings and travel with
little or no human intervention. The four key capabilities of autonomous vehicles are a
comprehensive understanding of sensor data, knowledge of their positions in the world,
building the map of unknown environment, as well as following the planed route and
collision avoidance.

This thesis is aimed at building a low-cost autonomous vehicle prototype that is
capable of localization and 2D mapping simultaneously. In addition, the prototype
should be able to detect obstacles and avoid collision. In this thesis, a Redbot is
utilized as a moving vehicle to evaluate collision avoidance functionality. A mechnical
bumper in front of the Redbot is used to detect obstacles, and a remote user can send
appropriate commands to control the Redbot via Zigbee network, then Redbot acts
accordingly, including driving straightly, changing direction to right or left, and stop.
Redbot are also used to carry the lidar scanner which consists of Lidar Lite V3 and a
servo motor. Lidar data are sent back to a Laptop running ROS via Zigbee network. In
ROS, Hector SLAM metapackage is adopted to process the lidar data, and realize the
functionality of simultaneous localization and 2D mapping.

After implementing the autonomous vehicle prototype, a series of tests are con-
ducted to evaluate the functionality of localization, 2D mapping, obstacle detection, and
collision avoidance. The results demonstrated that the prototype is capable of building
usable 2D maps of unknown environment, simultaneous localization, obstacle detection
and collision avoidance in time. Due to the limited scan range of the low-cost lidar
scanner, boundary missing problem can happen. This limitation can be solved through
the use of a lidar scanner with larger scan range.