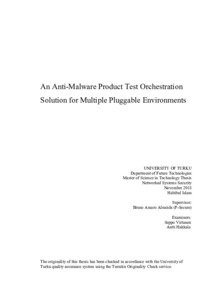 The term automation gets thrown around a lot these days in the software industry. However, the recent change in test automation in the software engineering process is driven by multiple factors such as environmental factors, both external and internal as well as industry-driven factors. Simply, what we all understand about automation is - the use of some technologies to operate a task. The choice of the right tools, be it in-house or any third-party software, can increase effectiveness, efficiency and coverage of the security product testing.

Often, test environments are maintained at various stages in the testing process. Developer’s test, dedicated test, integration test and pre-production or business readiness test are some common phrases in software testing. On the other hand, abstraction is often included between different architectural layers, ever-changing providers of virtualization platforms such as VMWare, OpenStack, AWS as test execution environments and many others with a different state of maintainability. As there is an obvious mismatch in configuration between development, testing and production environment; software testing process is often slow and tedious for many organizations due to the lack of collaboration between IT Operations and Software Development teams. Because of this, identifying and addressing test environmentrelated compatibility becomes a major concern for QA teams.

In this context, this thesis presents a DevOps approach and implementation method of an automated test execution solution named OneTA that can interact with multiple test environments including isolated malware test environments. The study was performed to identify a common way of preparing test environments in in-house and publicly available virtualization platforms where distributed tests can run on a regular basis. The current solution allows security product testing in multiple pluggable environments in a single setup utilizing the modern DevOps practice to result minimum efforts.

This thesis project was carried out in collaboration with F-Secure, a leading cyber security company in Finland. The project deals with the company’s internal environments for test execution. It explores the available infrastructures so that software development team can use this solution as a test execution tool.