Image Restoration and Transitivity in BP’s Press Releases during the Gulf of Mexico Oil Spill Crisis : A comparative study of BP’s press releases before and after Barack Obama’s first Oval Office address 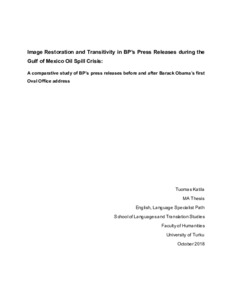 This thesis examines the multinational oil and gas company BP’s press releases during the Gulf of Mexico oil spill crisis in 2010. The Gulf of Mexico oil spill had vast economic and environmental effects which remain visible to this day. While the crisis was ongoing, BP faced an extensive public relations crisis which threatened the company’s public image. None of the parties involved in the drilling operation were ready to take responsibility for the oil spill. However, on the 15th of June 2010 Barack Obama held his first Oval Office address in which he explicitly blamed BP for the Gulf of Mexico oil spill. The importance of Obama’s involvement forms the third research question of the thesis and is not to be understated.
The thesis answers three main questions: 1) what types of strategies did BP employ in their press releases to improve or defend their public image, 2) how did BP portray itself, others, and the oil spill itself within those strategies, and 3) how did those strategies change after Barack Obama explicitly placed blame and responsibility for the oil spill on to BP. The thesis employs William Benoit’s Image Restoration Theory to analyze and categorize image restoration strategies used by BP. M.A.K Halliday’s transitivity theory is used to reveal how BP’s linguistic choices attempted to influence how the oil spill and the parties involved are perceived.
The thesis analyzed a total of 36 press releases, 18 from the time period immediately after the explosion of the Deepwater Horizon and 18 after Barack Obama’s first Oval Office address. The analysis found that BP greatly emphasized the use of bolstering, compensation and corrective action as image restoration strategies. The transitivity analysis revealed that BP emphasized portraying itself as the actor, taking concrete actions towards fixing the issue at hand. The transitivity analysis also revealed the importance of the grammatically optional circumstances, meaning adverbial groups or prepositional phrases providing additional information, in fulfilling or strengthening the image restoration strategies used by BP. In addition, the comparative analysis revealed that Barack Obama’s involvement had a direct effect on BP’s use of image restoration strategies within the press releases. After Obama assigned blame to BP, BP’s use of compensation increased significantly while excuses, denials and shifting blame decreased.
Further research could be conducted on how other important events, for example the release of an official government report on the oil spill, affected BP’s choices of image restoration strategies. In addition, the importance of the optional circumstance in enabling and fulfilling image restoration strategies opens possible new avenues for research.