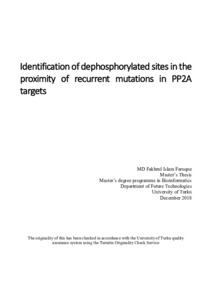 Protein Phosphatase 2A (PP2A), a major serine/threonine phosphatase, is known to be involved in the wide range of cellular functions in many cell types. Notably, PP2A’s tumor suppressor function has a great potential for therapeutic use in cancer patients. However, understanding basic functions as well as translational potential of PP2A is complex and is at its infancy. Identification of PP2A targets, and especially target sites nearby the recurrent mutations can potentially provide insights on PP2A’s function in the context of cancer. Thus, the focus of this thesis was to identify target sites which are directly or indirectly dephosphorylated by PP2A and thereby map the sites nearby the significant recurrent mutations in cancer samples.

Thesis presented here in made use of in-house as well as published phosphosproteomics datasets to identify the potential targets of PP2A. A protein was considered as a target of PP2A if its phosphopeptide was significantly regulated as assessed either from student’s t-test or alternatively defined in respective publications. In order to identify the significantly mutated residues as compared to background mutation rate, ActiveDriver methodology was employed in this study. ActiveDriver tests the null hypotheses given mutational, intrinsic disorder and phosphosite information. The null hypothesis assumes that mutations in protein sequences follows Poisson distribution.

As an example of PP2A target identification process, an in-house generated B56 dataset of PP2A phosphpoproteomics dataset was used. Two sided students t-test was performed to find differentially regulated peptides and the analysis revealed 1249 out of 6739 peptides were statistically significant (unadjusted p value < 0.05). Volcano plot and heatmap for the analysis of B56 dataset were used to visualise most significant peptides. A comprehensive dataset of non-redundant phosphosites from various PP2A phosphoproteomics datasets (three groups of PP2A families) was built to reflect the broader coverage of PP2A targets. ActiveDriver analysis on cBioportal pancancer study revealed that there were 19 genes with 248 active regions (p-value < 0.05). Similar analysis on COSMIC mutational dataset revealed 57 genes with 2,723 active regions (p-value < 0.05). Network analysis was carried out on proteins having at least one significant active region. The resulting protein-protein interaction network from STRING database for the target list of proteins after ActiveDriver analysis is significantly enriched as compared to any random network and it was also significant (5e-15). Functional enrichment analysis also provided strong evidence among those analysis and PPI enrichment p- value also significant in both cases. Based on false discovery rate, biological and molecular function among the selected genes also showed significant.
This mutational study provides better understand to identify target sites which are directly or indirectly dephosphorylated by PP2A and thereby likely provide potential clues for mechanisms of action for PP2A function.