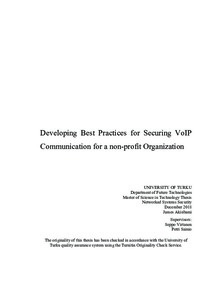 Voice over Internet Protocol (VoIP) is the most widely used service around the world. The proficiency of it utilizing the web has increased awesome ubiquity in the current years. With this notoriety, there is expanding worry about the wellbeing of the system. The robbery or loss of the information being exchanged is great concern. For example, a basic problem for researchers who are developing safeguards for VoIP systems is the level of threats and other issues experienced by the non-profit organizations while implementing VoIP communication. This problem originated when non-profits received pressure from their donors not to implement VoIP communication because it will record important and valuable information of their bank account, including their bank balance, and consequently, exposing them to the public.

Other dangers include safeguarding secrecy, respectability, and accessibility of the system, known as CIA. dangers. To battle these dangers, some security conventions and calculations have been produced. For example, the H.235 has been investigated, their calculations updated, and it is currently regarded as the most recent and effective system for security of the VoIP system.

Another method for battling issues and concerns, and one that is the most proficient due to bigger budgets than non-profits, is VoIP being utilized in new structures and the IT work force. Fortunately, the expanding interest of VoIP has guaranteed and emphasized the requirement for more research to build up the effective security structures and countermeasures of CIA threats.

This investigation examines the methods by which such security issues concerning VoIP can be set out to give an appropriate, secure and effective method for correspondence and data trade. In this postulation, the analyst will profoundly examine the relief of VoIP security issues.