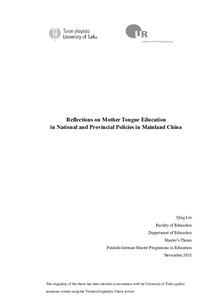 The structure of this thesis is as follows. Chapter 1 introduces the previous research on language education policies in Mainland China and Chapter 2 to 4 present the basic information of languages and MTE in Mainland China. Chapter 5 explains the research method in detail and introduces the cases chosen for this study. The analysis of the national and local level policies will be presented in Chapter 6, and the reflections on MOI policies in educational, political and social-economic sphere will be discussed in Chapter 7. Finally, Chapter 8 will serve as concluding part to summarize the findings.