Equilibrium of Societal Paradigms: a Theoretical Analysis of the Compatibility of Medicalization and Inclusion

Equilibrium of Societal Paradigms: a Theoretical Analysis of the Compatibility of Medicalization and Inclusion 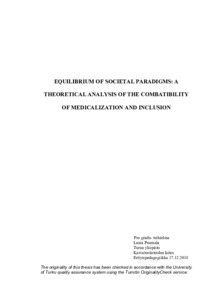 In this thesis, the social paradigms of inclusion and medicalization are analyzed through theoretical research methods. The two paradigms are simultaneously present in our modern western countries, guiding our understanding of and reactions to deviance and disability. The aim of this study is to examine if these two paradigms are compatible with each other, or if they cause contradictions and conflict in the definitions and demarcations of normality and deviance.

This is a theoretical study, where the traditional methods of analytical philosophy are applied. Most widely used methods in this study are concept analysis and reflective equilibrium. Through these methods, the concepts of inclusion and medicalization, as well as of normality and deviance, are analyzed, and their similarities and differences are evaluated in a holistic manner.

This thesis comes to a conclusion of profound contradictions between the paradigms of inclusion and medicalization. Although, there are some similarities between the ideologies and the historical package of these paradigms the differences between them greater, both in number and severity. Great differences themselves do not necessarily mean that the paradigms are incompatible, in this thesis it is argued that the differences between inclusion and medicalization are by their nature such that contradictions are incompatible. To solve this conflict, firstly, more explicit discussion and clearer definitions of the key concepts are needed. This thesis aims to accomplish at least that much. Further, also critical analysis and evaluation of the premises and policies of the two paradigms is also needed. This thesis also hopes to take a step into that direction.