An Assessment of DevOps Maturity in a Software Project 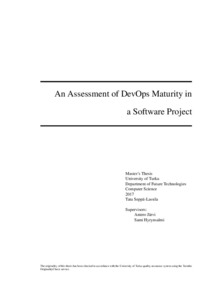 The DevOps approach seeks to solve this contradiction by bringing software developers and system operators together from the very beginning of a development project. In the DevOps model, changes deployed to production are small and frequent. Automated deployments decrease human errors that sometimes occur in manual deployments. Testing is at least partly automated and tests are run after each individual software change.

However, technical means are only one part of the DevOps approach. The model also emphasizes changes in organizational culture, which are ideally based on openness, continuous learning, and experimentation. Employees possess the freedom of decision-making while carrying the responsibility that follows. In addition to individual or team-based goals, each employee is encouraged to pursue the common goals.

The aim of this thesis is two-fold. Firstly, the goal is to understand and define the DevOps model through a literature review. Secondly, the thesis analyzes the factors that contribute to the successful adoption of DevOps in an organization, including those with the possibility of slowing down or hindering the process.

A qualitative case study was carried out on a system development project in a large Finnish technology company. The data consists of semi-structured open-ended interviews with key personnel, and the findings are analyzed and compared to factors introduced in previous DevOps literature, including the DevOps maturity model. The case project is also assessed in terms of its DevOps maturity. Finally, impediments and problems regarding DevOps adoption are discussed.

Based on the case study, major challenges in the project include the large size and complexity of the project, problems in project management, occasional communication problems between the vendor and the client, poor overall quality of the software, and defects in the software development process of the vendor. Despite the challenges, the company demonstrated progress in some aspects, such as partly automating the deployment process, creating basic monitoring for the software, and negotiating development and testing guidelines with the vendor.