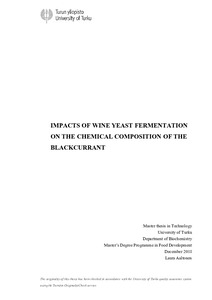 Grapes are the most commonly used raw material in the wine making. If wines are made from other fruits than grapes, they are called fruit wines. Blackcurrant is the second most cultivated berry in Finland. The fermentation of wine is usually made with Saccharomyces yeasts, but use of non-Saccharomyces yeasts has been an increasing trend in the past few years. The chemical composition thus the overall quality of the wine depends on the yeast used.

The goal of the study was to investigate the effects of Saccharomyces and non-Saccharomyces yeasts on the chemical quality of the blackcurrant wine. Five different yeasts were used to ferment blackcurrant juice: two S. cerevisiae, one S. bayanus, one Torulaspora delbrueckii and two Metschinikowia species. Metschinikowia-yeasts were sequentially inoculated with two S. cerevisiae yeasts. The sugars, organic acids and alcohols in the samples were analysed with GC-FID methods and the flavonols and anthocyanins with HPLC-DAD methods.