Opposition Discourse on Security Policy in Japan : Case of the 2015 Legislation for Peace and Security 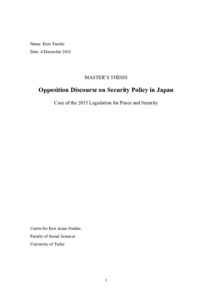 Peace and Security, with special focus on two parties, the Democratic Party of Japan and the Japan Communist Party. It offers a detailed historical overview of developments in Japan’s security policy in the post-World War Two era, showing that the country’s policies have undergone evolution over the years, while staying well within the constraints established by Japan’s unique Constitution. The thesis then explains how the form and the parties of the opposition have changed over the years, showing how the postwar ideological divisions on security policy have weakened, but not disappeared, after the collapse of the Japan Socialist Party and in the 1990s.

Through an overview of scholarly literature on Japan’s security policy, arguing that security policy has changed in response to external circumstances surrounding Japan, while emphasizing the endurance of public opinion and pacifist norms that play important roles in shaping security policy. Afterwards, it explains the background of and reactions to the 2015 Legislation for Peace and Security. Finally, dividing the discourses employed by opposition parliamentarians into several categories, the thesis argues that opposition discourses focus on several points, such as concern over entanglement in US conflicts; the government’s justifications for the legislation; perceived rise in risks for Self-Defense Forces service members deploying abroad and possibly to Japan’s citizens more widely; the unconstitutionality of the legislation and a lack of public understanding of the legislation. In conclusion, the thesis argues that these discourses will likely continue to form the main thrust of opposition to security legislation in the future and offers a brief comment on the status of parliamentary opposition in late 2018 and the possibility of constitutional revision.