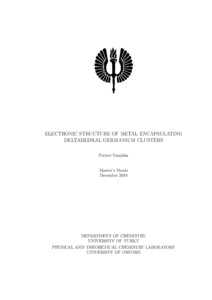 The last century has seen the dawn of a new era of research focused on Zintl phases and ions. Many of their properties have been successfully characterized, and new avenues of research are continuously explored. This work focuses on the electronic structures of two Zintl ion systems, both discovered, synthesized, and published by Dr. J. M. Goicoechea and Prof. S. C. Sevov in 2005. The first system type consists of deltahedral germanium clusters with an interstitial nickel atom, and a capping fragment consisting of a nickel atom and a ligand. The second compound consists of a similar clusters, but in a dimeric form.

The work presented here gives new insights to the electronic structure of these systems. Certain systematic changes in stability and electronic interactions were observed based on the series of density functional theory calculations performed,
demonstrating that the overall electronic structure is probably complex enough to contain factors which are not accounted for by Wade’s rules.

Further discoveries were made by utilizing RAS-SCF calculations. These calculations demonstrated that the nickel filament present in the second type of compounds is actively contributing to the total electron density on the cluster.