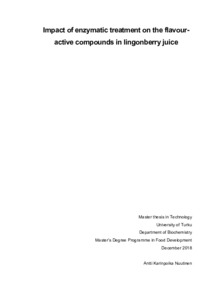 Lingonberry (Vaccinium vitis-idaea) is a wild, abundant, easy to pick, and highly nutritious uncultivated berry. Lingonberries are usually consumed as such, or as juices, jams, and purees. Enzymatic treatment is traditionally used to extract higher juice yields and to increase the yields of various compounds, such as anthocyanins and other phenolic compounds, in the juice. The outcome of enzymatic treatment is dependent upon the type of enzyme, concentration, incubation time and temperature.
The aim of this work was to study how different enzymes (pectinases, cellulose, β-glucosidase) impact on the flavour-active compounds of lingonberry juice. Volatile compounds in freshly pressed lingonberry juices were detected using gas chromatography coupled with mass spectrometry. Seven types of lingonberry juice samples were studied, two of which were references without enzyme treatment and five were treated with different enzymes. With each of the seven types of treatments the independent parameters studied were minimum and maximum enzyme dosage, and incubation times of 1 hour and 3 hours. The juices for each treatment were prepared in triplicate, and samples from treated juices were taken in triplicate.
From lingonberry juice samples, 34 volatile organic compounds were identified by comparing their mass spectra with those in the mass spectral library. The impact of different treatment conditions on these compounds was determined by using multivariate statistical methods. Peak areas were expressed with respect to internal standards. Incubation with enzymes increased the total concentrations of volatile organic compounds all around more than incubation without enzymes. Pectinases derived from a classic strain of Aspergillus niger increased the yields of juice and concentration of volatile organic compounds the most. The compounds identified were generally terpenes, alcohols, aldehydes, esters and ketones present in small quantities. VOCs with highest overall concentrations found were ethyl acetate, ethyl benzoate, 2-methyl-3-buten-2-ol, benzaldehyde, pentanal, hexanal, undecane, α-Pinene, linalool L and diacetyl.