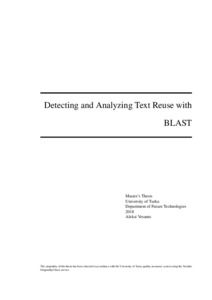 In this thesis I expand upon my previous work on text reuse detection. I propose a novel method of detecting text reuse by leveraging BLAST (Basic Local Alignment Search Tool), an algorithm originally designed for aligning and comparing biomedical sequences, such as DNA and protein sequences.

I explain the original BLAST algorithm in depth by going through it step-by-step. I also describe two other popular sequence alignment methods. I demonstrate the effectiveness of the BLAST text reuse detection method by comparing it against the previous state-of-the-art and show that the proposed method beats it by a large margin.

I apply the method to a dataset of 3 million documents of scanned Finnish newspapers and journals, which have been turned into text using OCR (Optical Character Recognition) software. I categorize the results from the method into three categories: every day text reuse, long term reuse and viral news. I describe them and provide examples of them as well as propose a new, novel method of calculating a virality score for the clusters.