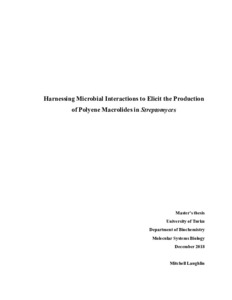 Since their discovery in the 1950s, polyene macrolides have been invaluable for treating life threatening fungal infections. Polyene antibiotics are unique because they target ergosterol, the fungal sterol, and disrupt the cellular processes that rely on ergosterol to function. While drug resistance threatens the utility of all other antifungal drug classes, polyene resistant strains remain rare. However, the polyene antibiotics in use have severe, dose-limiting side effects, and survival rates for systemic fungal infections are low. New compounds with improved therapeutic efficacy are needed.

Polyene macrolides are produced by the soil bacteria Streptomyces. Streptomyces have an extensive and carefully regulated secondary metabolism which enables them to outcompete co-inhabiting microorganisms by producing antibiotics suited for the present stressor. Over two-thirds of the clinical antibiotics derived from a natural source are produced by Streptomyces, but there has been a marked regression in compound discovery in recent decades. The standardized use of cell monoculture techniques could be why the full production potential of Streptomyces is not met in a laboratory setting.

In the current work, four strains of Streptomyces were cultured with baker’s yeast Saccharomyces cerevisiae to elicit the production of secondary metabolites that are not observed in monoculture conditions. One strain produced undecylprodigiosin and a cyclized derivative, but the other three strains produced significant amounts of unidentified polyene macrolides in co-culture conditions. Extracts from the Streptomyces were tested for bioactivity against yeast and analyzed with high pressure liquid chromatography, mass spectrometry and nuclear magnetic resonance.