A comparison of ll. 247-342 of the editions of The Proverbs of Alfred : advice on choosing a wife and the medieval literary view of women

A comparison of ll. 247-342 of the editions of The Proverbs of Alfred : advice on choosing a wife and the medieval literary view of women 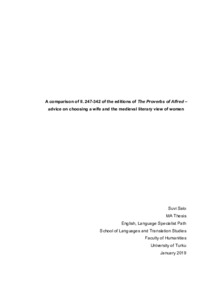 The Proverbs of Alfred is a twelfth century didactic poem that survives today in four different thirteenth century manuscripts. The poem is set in the time of King Alfred (ca. eighth century) and there is a frame story in the poem inside which King Alfred offers life advice to his male subjects. The lines 247-342 addressed in this thesis contain advice on choosing a wife and misogynistic warnings on how evil and deceitful women are. There is also advice on how to deal with wives. In this thesis I will try to shed light onto the social status of women in the Anglo-Saxon England and offer viewpoints and explanations to the tradition of Middle English misogyny in literature. I shall also discuss the possible audience and the purpose of the text and compare the research findings and notes of Olof Arngart, Edvard Borgström and Walter Skeat who have re-edited the manuscripts in the twentieth century.