Giving Voice to the Queer? : Social Actors and Engagement Strategies in the US Media upon the Legalisation of Nationwide Same-sex Marriage

Giving Voice to the Queer? : Social Actors and Engagement Strategies in the US Media upon the Legalisation of Nationwide Same-sex Marriage 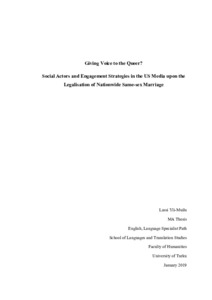 On 26 June 2015 the Supreme Court of the United States ruled in Obergefell v. Hodges that same-sex couples have a right to marry in every state of the US. This study focused on four news articles that reported on this ruling by examining the social actors, their roles and the engagement strategies identified in the articles. The aim of the study was to find out, which voices were engaged in the articles and if the authorial voice appraised the subject matter by advancing or downplaying particular points of view.

The theoretical framework of the thesis was based on the notions of representation and discourse as social interaction. The concept of social actors in discourse was based on a taxonomy by Van Leeuwen (2008). LGBTQ (lesbian, gay, transgender and queer/questioning) media representation and the history of US same-sex marriage were also discussed. The appraisal analysis was based on the subsystem of engagement from the appraisal theory, developed by Martin and White (2005). The study approached the issue also from a critical point of view, using critical discourse analysis and queer theory to assess whether same-sex marriage was set against heteronormative ideals.

The analysis was two-fold, comprising a social actor and an appraisal analysis, and used both quantitative and qualitative methods. The results show that all the articles entailed both institutional and personal voices and offered anti- and pro-same-sex marriage perspectives. Institutional social actors were often activated and individualised whereas personal, often queer, voices were often passivated and assimilated. The identified engagement strategies signalled more of genre conventions than of individual author appraisals, relying mainly on neutral reporting expressions. Even though the ruling was grounded e.g. in equality, the results suggest that same-sex marriage was seen in comparison to traditional ideals of marriage rather than as a fully-fledged queer institution. Further research into queer media representation is needed to understand how language reflects ongoing sociocultural changes in the LGBTQ community and in society.