Establishment of 3D co-culture model of mesenchymal stem cells and mononuclear cells for studying vasculogenesis/angiogenesis, and the magnetic isolation of endothelial progenitor cells from mononuclear cells

Establishment of 3D co-culture model of mesenchymal stem cells and mononuclear cells for studying vasculogenesis/angiogenesis, and the magnetic isolation of endothelial progenitor cells from mononuclear cells 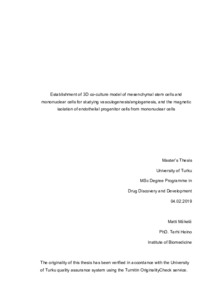 Bone tissue engineering that stimulates bone formation has improved normal fracture healing, but its true clinical impact is still lacking. One of the biggest problems with bone tissue engineered grafts is an inadequate blood supply to the site of implantation.
Our research group has previously shown that tubular, vessel-like structures are formed in the regular co-cultures of bone marrow derived mesenchymal stem cells (MSCs) and peripheral blood derived mononuclear cells (PB-MNCs). In addition, enhanced differentiation of both bone-forming osteoblasts and pericytes supporting vessel structures was observed. This offers an interesting possibility for a new cell-based therapy and could possibly solve the problem with inadequate blood supply.
In this project, a three-dimensional co-culture model was established to study angiogenesis/vasculogenesis by mixing type I collagen with Matrigel in four different ratios and culturing the cells within these gels. Both human umbilical vein endothelial cells (HUVECs) as well as MSCs and PB-MNCs were used. Cell proliferation and viability was analysed with AlamarBlue assay and live cell monitoring was done by IncuCyte ZOOM. Endothelial cell precursors and monocytes were isolated from peripheral blood by magnet activated cell sorting (MACS) with CD34 and CD14 markers, respectively. Isolated cells were grown with MSCs in a regular monolayer culture. Numbers of rounded and elongated cells were counted from microscope images with ImageJ program. Immunofluorescence staining for endothelial marker CD31 and pericyte marker PDGFRB was done on the co-cultures.
Results indicate that the morphology of the cells changed inside the gels. Cells started to reach out to neighbouring cells and formed networks instead of a single confluent layer. Primary cells stayed viable and started to proliferate in each gel. In the co-cultures with CD34 and CD14 selected cells, the number of rounded cells decreased, while the number of elongated cells increased, indicating a possible endothelial cell differentiation.
In conclusion, elongated, endothelial cell-like morphology and the formation of cellular networks appeared promising for the formation of vessel-like structures. Further studies are still needed both to confirm these results and to study the endothelial cell and pericyte differentiation in more detail.