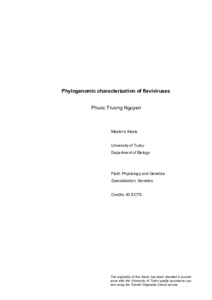 Background: The occurrences of global viral pandemics have been rising as increased travel between distant countries has introduced previously endemic viruses to new envi-ronments. Major contributors to global human hemorrhagic and neurological diseases with high mortality rates include half of the ca. 70 species of the genus Flavivirus. The most widespread and well-known flaviviruses are Dengue virus, Japanese encephalitis virus, West Nile virus and Zika virus. Although the transmission routes of major viruses are well-documented and thoroughly researched, the knowledge has been gained from past outbreaks, which has been a limitation in surveillance of novel flaviviruses. Thus, having early information about potential hosts is essential in controlling and preventing viral outbreaks.
Aims: The goal of the master’s thesis is to characterize the codon and nucleotide com-positions of flaviviruses and to assess a potential use to the identification of putative hosts. This methodology will be utilized to develop a new algorithm capable of identifying optimal hosts through a simple comparative codon usage analysis. This information will be highly valuable to estimate the risk of spread of a virus.
Methods: The genomic characterization of flaviviruses was done with computational bi-ology methods. Computed codon usages were analyzed with clustering methods to iden-tify subgroups of viruses and their optimal hosts. The rationale behind this methodology was that codon usages vary among species and this variability is driven by the virus adaptation to the hosts.
Results: (1) Genotypes of Zika viruses showed distinct codon usage patterns, which linked the origin of American and European virus cases to the Asian genotype. (2) Dis-tinct usage patterns were similarly observed when the methodology was applied to other major flaviviruses. (3) Optimal hosts for mosquito-borne flaviviruses included vertebrates and Aedes mosquitos, whereas tick-borne viruses were optimized to ticks. Aedes mos-quitoes were also optimal for insect-only flaviviruses. Culex and Anopheles mosquitoes were suboptimal to all groups. Moreover, flaviviruses clustered based on established vector-based classification, host types preferences and phylogeny. The identified hosts were in accordance to previous studies done in field and laboratory.
Conclusions: The proposed methodology based on codon usages is able to estimate hosts for flaviviruses within a close range. The algorithm can be implemented in compu-tationally weak equipment, thus it may be deployed fast and on-site during viral pandem-ics. In further studies this methodology, with minor modifications, could be utilized to predict putative hosts of other viruses. A scientific article describing the host identification algorithm is under preparation (appendix 4).