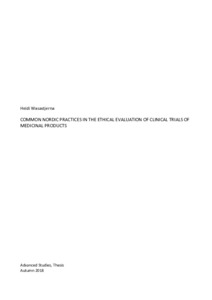 The European Parliament and the Council of the European Union approved in 2014 a new Regulation on clinical trials on medicinal products for human use (536/2014) and repealed the previous Clinical Trial Directive 2001/20/EC. The Regulation is supposed to be adopted by all member states by the end of the year 2019. The Nordic Trial Alliance (NTA), an initiative funded by the Nordic Council of Ministers, hosted a project on the harmonization of the ethical evaluation of clinical trials in the Nordic countries in 2013–2016. NTA’s “Report on the Ethical Review Process for Clinical Trials in the Nordic Countries” described the influence of the EU Regulation on the Nordic countries and made suggestions for harmonization of their ethical review processes. In this thesis, the aim is to make a more detailed analysis of the current evaluation processes in the Nordic countries.

This study focuses on items K.-Q. of Annex 1 of the Regulation 536/2014, which are left for member state to regulate. These seven items are: subject recruitment arrangements, subject information leaflet and informed consent procedure, suitability of the investigator, suitability of the facilities, proof of insurance coverage or indemnification, financial and other arrangements and proof of payment of the handling fee (Regulation (EU) 536/2014). In this thesis, there is a summary of the current evaluation processes of the ethics committees in the Nordic countries and of the similarities and differences between the countries. The second part of the study describes in more detail the items K.-Q. and what should be regulated nationally according to the EU Regulation, as well as how the Declaration of Helsinki (WMA 2013) and the Good Clinical Practice guidelines (EMA 2016) deals with these items. It is also described how these issues may possibly be regulated in the current Finnish Draft for a Government Proposal for the Law on Clinical Drug Trials (14.7.2017 http://stm.fi/hanke?tunnus=STM077:00/2017).