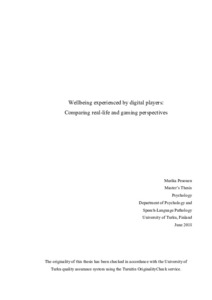 The on-growing consumption of digital games has worried many. Recent barometers show that 75% of Finnish citizens and 67% of Australians play video games. Earlier studies suggest many adverse effects on gaming. Digital games are nevertheless largely used, and thus understanding the positive experiences of gaming is important.

To better understand why gaming is so popular, this research examined the positive subjective experience of gaming. The gaming preferences of players and the subjective experiences of digital gaming were examined by a web survey (N=513) distributed to Finnish and Australian gaming forums. The respondents were players from Australia and Finland, who played on average 20.16 hours per week. The players’ specific preferences for game dynamics were examined with an upgraded version of the Game Dynamics Preferences Questionnaire (Vahlo, Kaakinen, Holm & Koponen, 2017) consisting of 50 items. Using exploratory factor analysis, these game dynamics were grouped into core dynamics. A cluster analysis based on the factor scores of the questionnaire answers was then used to divide the gamers to different profiles. The survey also contained four psychological scales: self-efficacy, curiosity, subjective vitality and psychological empowerment. There were two versions of each of these scales: first participants responded to the scales from real-life perspective, then from gaming perspective. By comparing the responses given in real-life vs. gaming perspective, the positive subjective experience of gaming could be calculated.

This study conducted six core dynamics: Assault and Coordinate; Manage; Affect, Aesthetics and Expression; Explore and Develop the Gameworld; Interact; and Logic and Problem Solving. Based on the dynamics, the players divided into five gaming profiles: the Wise Adventurer, the Looter­Adventurer, the Explorer, the Commander and the Companion. The profiles consisting of heavy gamers had more positive subjective experiences of gaming, compared to light gamers. All of the different gaming profiles experienced significantly more curiosity when gaming, compared to real-life. The results suggest that heavy gamers have positive subjective experiences during gaming. In the future these subjective experiences should be further examined by controlled intervention studies.