The Image of Your Imagination : Rediscovering Drag, Reconstructing Gender

The Image of Your Imagination : Rediscovering Drag, Reconstructing Gender 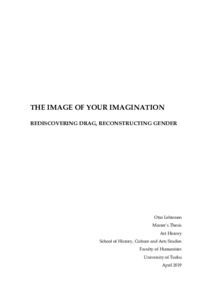 In this thesis, I examine prevalent definitions of drag. I analyze the notion of drag as gender performance and consider key questions regarding drag as an artistic practice and medium: drag as a form of cross-dressing; drag’s subject matter; the similarities and differences between drag and fe/male impersonation; and drag’s relation to gender, particularly nonbinary genders and cis-heteronormative gender ontology. I examine how the purported reality of binary gender and sexual dimorphism is apparent in and shapes understandings of drag. My key sources include Esther Newton’s anthropological study of American drag queens in the late 1960s, Jack Halberstam’s writing on drag king culture, and Judith Butler’s theorization of gender and drag.

Following these arguments, I examine two instances of contemporary art and fashion—Finnish artist Artor Jesus Inkerö’s (b. 1989) holistic bodily project and Palomo Spain’s gender nonnormative fashion—and how interpretations of them pertain to similar questions of gender and sex as definitions of drag. I propose the term ‘areal’ to reflect how the existence of nonbinary genders is subordinate to the reality of the supposedly original and authentic binary genders. Finally, I argue that contemporary drag, Palomo Spain, and the work of Artor Jesus Inkerö challenge and erase cis-heteronormative notions of gender and, in doing so, attest post-postmodern aesthetics.

I conclude that definitions of drag reflect perceptions of gender and the human and, ultimately, conceptions of reality. As an invitation for future research, I suggest that outdated notions of drag need critical revision and redefinition.