The effect of friendships on the health of the Asian elephant 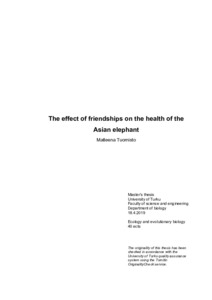 The link between health and social relationships has been extensively studied in humans, but significantly less in other species. Here I study another large, social and long-lived mammal species, the Asian elephant (Elephas maximus), to determine whether friendships affect their health. The study population is a semi-captive population working in the timber industry in Myanmar. The semi-captivity of the population offers a unique chance to obtain extensive and accurate data from a population resembling a wild population significantly more than one in a zoo. Sixteen health-related variables were measured, and linear models were run for each to determine whether having friends affects these. I found that cortisol levels are higher in solitary individuals, and there were higher levels of protein in the blood of solitary males than males with friends. I also found that individuals with relatives as friends were less likely to have trematode parasites, were heavier, had lower systolic blood pressure and higher cortisol than those who didn’t have relatives as friends. A majority of relative-friends are the focal elephant’s own baby, which offers an explanation for differences in mass and cortisol. Solitary individuals having higher cortisol levels is consistent with research done on other social species. Total protein can indicate multiple things, thus the reason for and implication of differing levels is currently unknown. This study suggests that friendships have some effect on elephants’ health, which could have implications for captive management and conservation. More research is required to determine the effects more accurately.