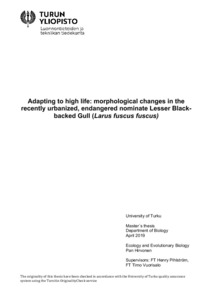 The rapid urbanization is referred to as the largest threat to wildlife besides climate change. As the urban areas continue to expand worldwide, animal are forced to move to other areas or adapt to the built-up habitats. The adaptation to new environment can sometimes lead to morphological changes between the urban and rural animal populations. Of all animal groups gulls, in particular, have been successful in colonizing urban areas and various gulls species have started to nest in cities. In Finland this phenomenon has also occurred in the largest urban areas of the country and at present most of the Finnish gull species nest or feed in the cities. Among the urban gull species is the endangered nominate Lesser Black-backed Gull (Larus fuscus fuscus), which has declined in numbers throughout the species range since the 1970s. However, it seems that Lesser Black-backed Gull thrives in urban areas and contrary to this species´ decline in its natural habitats, the Lesser Black-backed Gull has notably increased its numbers in cities. In this thesis I studied the morphological changes in urban Lesser Black-backed Gulls by measuring study skins and comparing the morphological measures and plumage patterns between urban and rural individuals. Based on the results, there were only slight differences between the size of urban and rural individuals and apparently no differences in plumage patterns. However, the sexual dimorphism in urban gulls seemed to have reduced and the two sexes were more difficult to distinguish from each other by morphological measures.