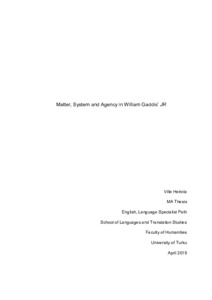 This thesis analyzes William Gaddis’ novel JR (1975) from a perspective that combines material ecocriticism with systems theory. The aim is to show how JR depicts the relationship between human and material agency and how it leads to political, social and economic considerations that resist neoliberal capitalism, which was emerging at the time of JR’s composition. JR is seen as an example of a creative ontology, where matter signifies and communicates alongside humans and possesses an agency that, while radically different from human agency, makes itself seen and heard. The thesis is also concerned with how material agency in humans, non-humans and the environment interacts with the autopoietic systems of contemporary life in JR.

The two primary theoretical frameworks this thesis employs are material ecocriticism as proposed by Serpil Oppermann and Serenella Iovino (2014), and the idea of autopoietic systems proposed by Niklas Luhmann (1984) and Hannes Bergthaller (2014). Readerly response to JR is discussed by way of personal experience with the text and Rachel Smith’s (2015) idea of impersonal feelings is used to argue for the idea that reading JR through immersion is an ecological gesture that serves to orient the reader towards the novel’s depiction of material agency.