Examining the symmetry of optical flares in blazars

Examining the symmetry of optical flares in blazars 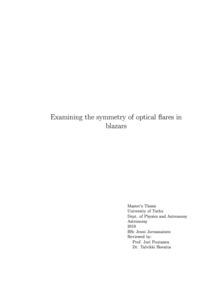 Blazars are one of the most energetic types of active galactic nuclei. They are luminous emitters that can be detected over the whole of the electromagnetic spectrum. They are radio-loud objects whose jet is closely aligned to our line of sight, which together with the relativistic jet speeds cause Doppler boosting to the jet. Because of the Doppler boosting, blazars are extremely variable objects and their luminosities have been detected to vary on time scales of years to days and all the way down to minutes. They possess strong radio and optical polarization that is also known to vary. Blazars can be divided into two main classes of BL Lacertae objects (BL Lacs) and flat-spectrum radio quasars (FSRQs) based on their spectral properties.

In this thesis I studied the symmetry of the optical flares in long-term blazar light curves obtained within the Tuorla Blazar Monitoring Program. In the analysis, I utilized a Bayesian blocks method, which decomposes the light curves into individual flaring episodes. The symmetry and its correlation with other obtained parameters were examined and compared between the different blazar types.

The flares were found to be mostly symmetric, which is in accordance with other studies made on the subject. This implies that the variability in the optical band is tied to the light crossing time across the emission region. This study showed that the symmetric or asymmetric behaviour of the flares is similar in different types of blazars. Investigating the symmetry of the flares further in the optical band can give a means to constrain the region of the optical emission, clues for the composition of the jet, and shed light on the mechanisms that accelerate particles in the jet.