One size fits most? : Visual representation of women in Brandy Melville’s Instagram images 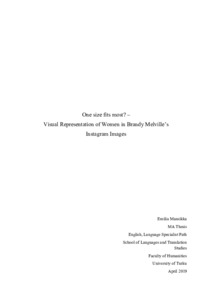 This thesis examines the visual representations of women in Brandy Melville’s Instagram imagery and aims to evaluate the teen retail brand’s contribution to today’s portrayal of women in the media. Brandy Melville’s strong reliance on social media in its marketing and the promotion of small-sized clothing with the slogan ‘one size fits most’ provide an interesting starting point for the study.

The study employs content analysis as a method to examine the corpus of 200 images and 303 female representations referred to as Brandy Girls. Theoretical framework of study is built upon Theo van Leeuwen’s (2008) theory of visual representation of social actors, which provides tools for scrutinizing the depicted people. Also, the related work of Paul Messaris (1997) is addressed.

As a critical discourse analysis, the study has its interest in the representational choices of the brand which as an influential authority targeting mainly teenagers has the power to define what kinds of representations are covered in the media. The results indicate that Brandy Melville promotes a strongly stereotypical female representation and reproduces images of the thin and white ideals.

On a more general level, the study points to the larger cultural context in which often unrealistic gendered ideals are produced and maintained and aims to highlight the importance of visual literacy especially in the current digital age.