Interrupting and overlapping in the US presidential debates - a comparative study

Interrupting and overlapping in the US presidential debates - a comparative study 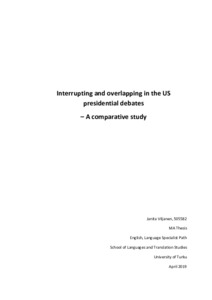 The theoretical frame was constituted on “An analysis in terms of relationally
neutral, power- and rapport-oriented acts” by Julia A Goldberg (1990) and “A
simplest systematics for the organization of turn-taking for conversation” by Harvey
Sacks et al. (1974). The main alignment of the study was Julia Goldberg’s poweroriented interruptions and its two subheadings “content control interruptions” and
“process control interruptions”.

In the study it was found that the power-oriented interruptions were more
prevalent in the 2016 elections than in the 2012 elections. The difference was most
visible in the prevalence of content-control interruptions as there was a major
increase in their number in 2016 debates.