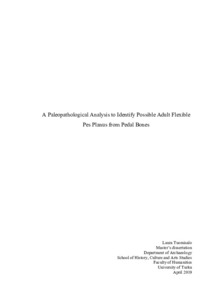 The medial longitudinal arches developed during the evolution of bipedalism. These
arches have biomechanically significant tasks during propulsion and impact. High
arches also have a history of admiration. However, a large percent of the population
worldwide suffer from depressed longitudinal arches, a deformity called pes planus. The
deformity is under lots of debate medically and underrepresented archaeologically and
paleopathologically.

This study focuses on diagnosing pes planus from bones. There are multiple methods
for medically diagnosing the deformity on living individuals, but only a handful of
studies purely concentrate on the paleopathological side. For this study, the tali,
naviculars, calcanei and tibiae of 32 individuals from the University of Helsinki human
remains collection were measured and pictured. Angle measurements between two
bones were calculated from the pictures and they were compared with each other and
with the measurements of the bones to show correlations.

The results did not offer a simple method for diagnosing the deformity. What the
research offers however, is more knowledge about the positions of bones affected by
pes planus and changes in them. The results indicate that the width of the calcaneus has
more influence on the medial longitudinal arch collapse than previously argued. Also,
the angular shape of the talus head on the transverse plane correlated with some of the
angles used in diagnosing pes planus clinically.