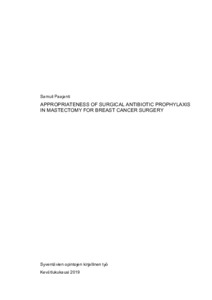 Surgical site infections (SSI) affect 5 – 28 % of the patients who undergo breast surgery. In worst cases SSI can cause sepsis, delay of oncological treatments or death. Antibiotic prophylaxis (AP) is often used in these operations to reduce the risk of SSI’s, even though the research data is somewhat conflicting. It is also shown that microbial resistance to antibiotics is growing, and one of the reasons is the abuse of antibiotics. The primary purpose of this study was to evaluate the impact of AP in mastectomies, and secondarily to identify other risk factors for SSI’s.
A retrospective medical record review of 300 consecutive patients who underwent mastectomy for oncological reasons between 1.5.2014 – 11.7.2016 was conducted. Patients were divided into two groups, where the prophylaxis group had received 1.5 g cefuroxime intravenously and the control group received no intervention. SSI incidences were compared between the two groups, and additionally other complications. Analysis about how certain potential risk factors managed to predict SSI’s and other complications was also performed.
There were no statistically significant differences in the occurrence of SSI’s between the two groups. AP did not reduce the SSI rate in prophylaxis group when compared to the control (RR 1.3; 95% CI: 0.75–2.30, p=0.343). The most common microorganism isolated was Staphylococcus Aureus in both groups. Findings of this study does not support the routine use of antibiotic prophylaxis in mastectomy, and more studies about the subject are needed.