The Development of Speech Rhythm and Fluency of Advanced English Learners: A Mixed Methods Study of the Correlation between Native Speaker Evaluations and Acoustic Measures 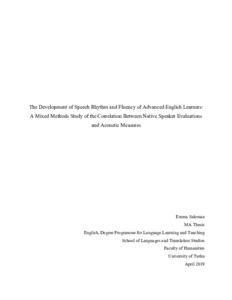 This thesis examined the changes in speech rhythm and fluency of advanced English learners during a pronunciation course. The research strived to answer the following research questions: ‘Do speech rhythm and fluency of advanced English learners change after a pronunciation course according to native speaker ratings?’, ‘if yes, which acoustic measures do these changes correlate with?’, and ‘what is the correlation between the perceived speech rhythm, fluency, accentedness, and comprehensibility?’. I approached these issues through mixed methods, both quantitative and qualitative. First, 20 advanced Finnish learners of English were selected out of 45 first-year major English students available. The number of the participants was limited keeping in mind the duration of the native-speaker questionnaire. The questionnaire consisted of background information questions and 42 speech samples to be rated on a 9-point Likert scale, cropped from the learner recordings as well as one native speaker. After collecting responses from 31 native speakers of English, I conducted a statistical analysis, whose results were then used for extreme case sampling. The speech of four learners with the biggest changes in their speech rhythm and fluency was then analyzed acoustically to find the contributing factors.
The results showed both positive and negative changes on an individual level, but the differences were not statistically significant on a group level. The acoustic analysis demonstrated higher fluency scores correlating with faster articulation rate, smaller number of unfilled pauses, the location of pauses at phrase or clause boundaries, and fewer repairs. Rhythm measures revealed that pitch and amplitude peaks generally matched better and the use of durational cues as well as vowel reduction and linking increased in the posttest speech. All four rated aspects correlated significantly, particularly speech rhythm and fluency scores in both pre- and posttest samples (r = 0.98). Thus, these two can be said to be closely intertwined. Based on the results, speech rhythm should not be neglected in pronunciation instruction as it strongly influences the perceptions of fluency, accentedness, and comprehensibility. It is suggested that further research on rhythm focuses on its nature as both a perceived and produced phenomenon, as well as defining its relationship to fluency.