IT integration in a mergers and acquisitions context 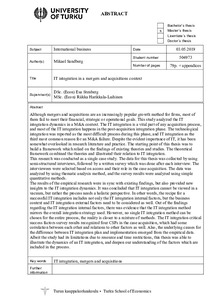 Although mergers and acquisitions are an increasingly popular growth method for firms, most of them fail to meet their financial, strategic or operational goals. This study analyzed the IT integration dynamics in a M&A context. The IT integration is a vital part of any acquisition process, and most of the IT integration happens in the post-acquisition integration phase. The technological integration was reported as the most difficult process during this phase, and IT integration as the third most common reason for an M&A failure. Despite the evident importance of IT, it has been somewhat overlooked in research literature and practice. The starting point of this thesis was to build a framework which relied on the findings of existing theories and studies. The theoretical framework combined the theories and illustrated their relation to IT integration.
This research was conducted as a single case study. The data for this thesis was collected by using semi-structured interviews, followed by a written survey which was done after each interview. The interviewees were selected based on access and their role in the case acquisition. The data was analyzed by using thematic analysis method, and the survey results were analyzed using simple quantitative methods.
The results of the empirical research were in sync with existing findings, but also provided new insights to the IT integration dynamics. It was concluded that IT integration cannot be viewed in a vacuum, but rather the process needs a holistic perspective. In other words, the recipe for a successful IT integration includes not only the IT integration internal factors, but the business context and IT integration external factors need to be considered as well. Out of the findings regarding the IT integration internal factors, there was evidence that the IT integration method mirrors the overall integration strategy used. However, no single IT integration method can be chosen for the entire process, the reality is closer to a mixture of methods. The IT integration critical success factors survey results recognized four CSFs in the case acquisition, which had some correlation between each other and relations to other factors as well. Also, the underlying causes for the difference between IT integration plan and implementation emerged from the empirical data.
Albeit the study had its limitations due to resource and time restrictions, this thesis was able to illustrate the dynamics of an IT integration, and deepen our understanding of the factors which are included in the process.