Discursive Legitimation Strategies in Presidential Statements: A Case Study of the United States and the Paris Agreement on Climate Change

Discursive Legitimation Strategies in Presidential Statements: A Case Study of the United States and the Paris Agreement on Climate Change 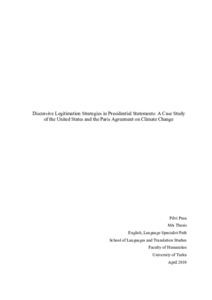 This thesis studies how two US presidents, Barack Obama and Donald Trump, aim to (de)legitimate their respective decisions on either to join the Paris Agreement on Climate Change or to withdraw from it. The two presidents’ uses of discursive legitimation strategies are compared to see how they differ or resemble each other. In addition, the study examines how the used strategies relate to the larger socio-political context of the US and two different administrations and parties in terms of their respective climate policies.

In order to examine what strategies the presidents used, a combination typology of legitimation strategies by Van Leeuwen (2007 and 2008) and Reyes (2011) was employed. The study also aimed to test how well the legitimation framework worked with this kind of topic, since it has not been previously applied similarly. A total of five presidential statements were analysed with the method of close reading.

The analysis found that there were more differences than similarities between the presidents. Obama used mostly positive legitimation and the strategies of altruism, mythopoesis and moral evaluation, while Trump employed mostly negative delegitimation and the strategies of authorization, hypothetical future and rationalization. Noteworthy was that Obama employed all strategies, but Trump did not use altruism at all. This provides a niche for further research. It was concluded that the used strategies relate to the policies of the presidents’ political parties. Future research could study more profoundly the divide in US climate policies in terms of discursive legitimation. The study proved that the legitimation framework could be applied to a topic of this kind. However, the framework could be tested and developed further, since there are still some limitations.