THE IMPACTS OF CULTURAL VALUES ON ELECTRONIC WORD OF MOUTH : OPINION LEADERSHIP AND OPINION SEEKING 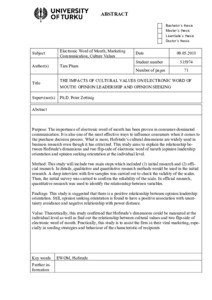 Purpose: The importance of electronic word of mouth has been proven in consumer-dominated communication. It is also one of the most effective ways to influence consumers when it comes to the purchase decision process. What is more, Hofstede’s cultural dimensions are widely used in business research even though it has criticized. This study aims to explain the relationship be- tween Hofstede's dimensions and two flip-side of electronic word of mouth (opinion leadership orientation and opinion seeking orientation at the individual level.
Method: This study will include two main steps which included (1) initial research and (2) official research. In details, qualitative and quantitative research methods would be used in the initial research. A deep interview with few samples was carried out to check the validity of the scales. Then, the initial survey was carried to confirm the reliability of the scale. In official research, quantitative research was used to identify the relationship between variables.
Findings: This study is suggested that there is a positive relationship between opinion leadership orientation. Still, opinion seeking orientation is found to have a positive association with uncertainty avoidance and negative relationship with power distance.
Value: Theoretically, this study confirmed that Hofstede’s dimensions could be measured at the individual level as well as find out the relationship between cultural values and two flip-side of electronic word of mouth. Practically, this study is to assist the firm in their viral marketing, especially in seeding strategies and behavior of the characteristic of recipients