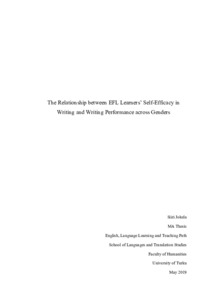 Since Albert Bandura first introduced the concept of self-efficacy, researchers have found evidence to support his claim, which suggests that the more people belief in their capabilities to succeed in a task, the better they will perform. Therefore, the skills and abilities people have are not the only matters which affect performance. This thesis studied how 41 Finnish first-year university students describe themselves as English writers, their writing self-efficacy levels, and whether their self-efficacy beliefs correlate with their writing performance.
The data were collected by using a questionnaire including a modified version of Prickel's (1994) writing self-efficacy scale. In addition, the subjects wrote a business message. The questionnaire included a few background questions as well as one open-ended question, which asked the subjects to describe themselves as writers of English. These writer descriptions were grouped and analysed by comparing their tone and content to the subjects' reports of their earlier success at school. By analysing the writing self-efficacy scores, most of the subjects portrayed a moderate level of writing self-efficacy. The male and female subjects' self-efficacy scores were compared using a statistical analysis tool SPSS 25, but the difference was not statistically significant. Conversely, when comparing writing performance, the difference between the male and female subjects' writing performance was found to be statistically significant, with the female subjects outperforming the male subjects. However, it was found that there was no correlation between the self-efficacy score and writing performance, even though the concept of self-efficacy is based on the assumption that higher self-efficacy is related to better performance.
The limitations of the study were its small sample size and the fact that self-efficacy is not directly observable. Similar to other studies based on self-reports, the data of the present study were based on the answers of the subjects, and because there are also a number of other factors which affect peoples' behaviour, definitive conclusions on the role of self-efficacy cannot be determined. However, the findings of the present study offer a glimpse of how Finnish university students evaluate themselves as writers of English, and how these writing beliefs influence their performance. In the future, more studies examining the role of self-efficacy in different contexts and in relation to different factors are needed in order to broaden our understanding of the concept. In addition, more longitudinal studies examining the development of self-efficacy beliefs are needed in the future.