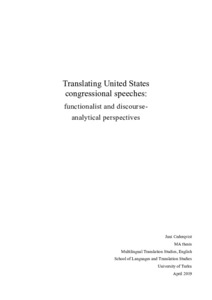 This thesis seeks to highlight problems and strategies relevant to translating United States congressional speeches for a European readership. The analyzed material comprises ten as-yet untranslated speeches held in the House of Representatives and the Senate by members of both main parties, Democrats and Republicans. The material was delimited by time frame and subject matter: the speeches coincide with Donald Trump’s presidency and concern the United States’ commitment to NATO.

The method of analysis involves a merger of functionalist translation approaches and political discourse analysis. Political source texts and their translations have been discussed by Christina Schäffner, upon whose genre-specific analyses of political speeches this thesis relies. Discourse analysis was chosen as a supplementary perspective due to the instruments it offers for the socio-cultural contextualization of texts beyond their linguistic units, thus adding to the generalizability of the analysis across potential target language communities.

The discourse-analytical models employed in the thesis are derived from Muntigl (2002) and van Dijk (2002). Muntigl examines how political issues are politicized and depoliticized through specific linguistic resources, while van Dijk discusses discourse structures and how they reflect the wider context of discourse production, including a “cultural Common Ground” between interactants. The speeches are first analyzed under these two models, whereafter parallels are drawn between the results of the discourse analysis and Schäffner’s functionalist framework, so as to establish what implications the material poses for translation.

The analysis found notable overlap between Schäffner’s functionalist approaches and the Muntigl and van Dijk models. The translational problems identified concern chiefly metaphor (including path semantic structures by which issues are politicized and depoliticized), genre conventions, contrastive meanings, deixis and, lastly, implicit information resulting from the speakers’ beliefs and the knowledge they assume of primary addressees. In light of these observations, further research on the translation of United States congressional speeches is encouraged.