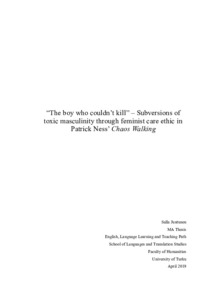 In this thesis I examine Patrick Ness’ Chaos Walking trilogy, a dystopian Young Adult series consisting of The Knife of Never Letting Go (2008), The Ask and the Answer (2009) and Monsters of Men (2010), and how it addresses themes of masculinity, gender and identity. The series’ main character Todd is a boy on the verge of adulthood, eager to become a man but struggling to conform to the requirements of masculinity placed on him by his community. The conflict between Todd’s identity and his need to meet society’s expectations of masculinity is the driving force of his narrative and the central theme of the series.

In my thesis I explore the ways toxic masculinity in Chaos Walking manifests itself both in the wider structures of society as well as the identities and actions of individuals, and the ways these two spheres influence each other. I look at the ways societal structures of gender and masculinity influence Todd’s self-image and actions, and how Todd’s changing identity, in turn, affects his views on society and masculinity. My analysis focuses on how Todd views and experiences with different aspects of toxic masculinity, such as sexism, gendered violence and suppression of emotion, and how they are subverted through an ethic of care that promotes equality, non-violence, emotional vulnerability and connection.