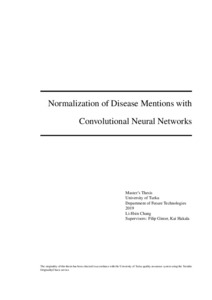 Normalization of disease mentions has an important role in biomedical natural language processing (BioNLP) applications, such as the construction of biomedical databases. Various disease mention normalization systems have been developed, though state-of-the-art systems either rely on candidate concept generation, or do not generalize to new concepts not seen during training.

This thesis explores the possibility of building a disease mention normalization system that both generalizes to unseen concepts and does not rely on candidate generation. To this end, it is hypothesized that modern neural networks are sophisticated enough to solve this problem. This hypothesis is tested by building a normalization system using deep learning approaches, and evaluating the accuracy of this system on the NCBI disease corpus. The system leverages semantic information in the biomedical literature by using continuous vector space representations for strings of disease mentions and concepts. A neural encoder is trained to encode vector representations of strings of disease mentions and concepts. This encoder theoretically enables the model to generalize to unseen concepts during training. The encoded strings are used to compare the similarity between concepts and a given mention. Viewing normalization as a ranking problem, the concept with the highest similarity estimated is selected as the predicted concept for the mention.

For the development of the system, synthetic data is used for pre-training to facilitate the learning of the model. In addition, various architectures are explored. While the model succeeds in prediction without candidate concept generation, its performance is not comparable to those of the state-of-the-art systems. Normalization of disease mentions without candidate generation while including the possibility for the system to generalize to unseen concepts is not trivial. Further efforts can be focused on, for example, testing more neural architectures, and the use of more sophisticated word representations.