Language learner identity and aptitude : a comparative study between Finnish and Chilean students and teachers of English

Language learner identity and aptitude : a comparative study between Finnish and Chilean students and teachers of English 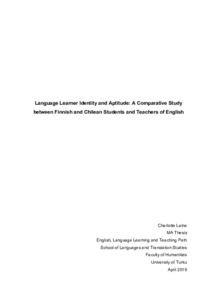 Language identity and language aptitude are individual traits closely related to the foreign language learner be it a student or a teacher. The aim of this study was to examine the relationship between these two concepts and how they vary between students and teachers respectively. A cultural component was added to ascertain whether the prevailing learning environment affects the outcome. The two subject groups either studied or taught English at an intermediate or higher level in Southwest Finland or Northern Chile. All of the participants (N = 62) were adults. A two-fold questionnaire was employed as the study method to gather data. The first part examined the subjects’ self-perceived language learner identity, while the second applied parts of the Pimsleur Language Aptitude Battery to obtain language aptitude scores for the subjects.

The language identity scores of the two subject groups were compared to each other using the Mann-Whitney U-test for independent samples. The same test was also used to compare the final language aptitude scores of the subjects. Spearman’s rank order correlation coefficient was applied in determining the interrelationship between the subjects’ language aptitude and language identity scores. All of these calculations were performed using SPSS Statistics.

The results revealed a difference between the language learner identities and language aptitudes of the subjects from the two different countries, indicating that the cultural background does have an effect. The results between students and teachers varied in relation to language identity, but not in reference to language aptitude. Similarly, a significant correlation was found between language identity and language aptitude in the case of the Finnish subjects, but not the Chilean subjects, warranting the need for further research into the interrelationship between these two concepts. Varying cultural contexts and their effect on the results should also be studied in the future.