The pragmatic competence of Finnish and Japanese learners of English : a comparative study with emphasis on the effect of cultural differences 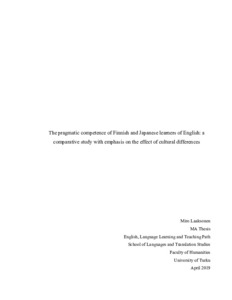 The subjects of this study consisted of two groups, a group of 64 first year upper secondary school English learners from Finland and a group of 69 first year high school English learners from Japan. The pragmatic competence of these two groups of learners was assessed with a multiple choice test of pragmatic competence which was adapted from two pre-existing test batteries. The test scores and the answers of the two groups were contrasted with each other in order to establish differences between the two groups of learners. The correlation of the scores in contrast to the countries’ cultural distance from Great Britain was also assessed in order to investigate the effect cultural distance might have on the pragmatic competence.