Role of keratin filaments on B-cell mitochondrial behavior and functionality 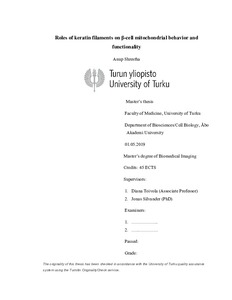 Keratin (K) intermediate filaments (IFs) are IFs of epithelial cell, and one of the most abundant IFs found in the cells, Keratins have various functions including stress protection, cell signaling and protein targeting. In pancreatic β-cells K8 and K18 are the main keratins expressed. Presence or absence of keratin IFs have shown to change the mitochondrial morphology in pancreatic β-cells which in turn likely influences the insulin production in the β-cells. Reduction in insulin production or insulin resistance causes diabetes mellitus (DM). Type I and type II DM was responsible for 1.6 million deaths according to study by World Health Organization (WHO) in 2016. The aim of this thesis work was to find the role of keratin IFs in mitochondrial morphology and dynamics to better understand the insulin production by using a cancerous pancreatic cell line, Murine Insulinoma 6 (MIN6) cells. Various microscopes were used to acquire images from the fluorescently labelled fixed and live cell samples followed by image analysis. In this study, it was found that the overexpression of wild type K8/K18 significantly decreased the mitochondrial motility and insulin vesicle count per unit area of the cell while mitochondrial count per unit cell area, mitochondrial fragmentation level and cell area were significantly increased. Likewise, the K18R90C mutation which disrupts keratins filaments, decreased the cell area, insulin vesicle count per unit cell area and mitochondrial count per unit cell area. The liver disease associated mutation K8G62 resulted in higher mitochondrial fragmentation and higher insulin vesicle count per unit area compared to the K8WT/K18WT overexpressing MIN6 cells. In conclusion, these results provide valuable insight to understand the role of keratin in the mitochondrial behavior and functionality which influence the insulin production in the pancreatic cells.