Overlapping Space Theory: A Study of Three Institutions of the Baltic Sea Region(s) and the Nordic Region

Overlapping Space Theory: A Study of Three Institutions of the Baltic Sea Region(s) and the Nordic Region 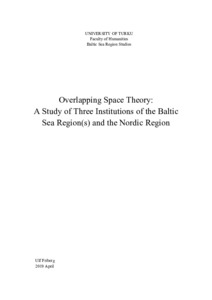 Regions are spaces of human construct, specifically spatial ones – this thesis is a study of regionalization theory and it explores the happenstance of regions which are overlapping that can be called “overlapping space”. It is asked what this `overlapping space´ is, how regions regard it and what possible influence it has on regions, regionalization, and the processes thereof. A hypothesis of how “overlapping space” works is conceptualized and tested through analysing interviews with spokespersons of the regions and of the strategy documents that the selected case regions have produced.
By studying the concept of an overlapping space of regions this thesis has a theory developing operationalization; it puts an emphasis on proper methods of theory development and requirements on material gathering and analysis. As a theory developing study the purpose is not to come up with “yes” or “no” conclusions but rather to make suggestions of feasible arguments for the mechanisms and functions of a hypothesis or a theory.
The procedures of this thesis problematize the driving forces behind regionalization and suggest that “legitimacy” is an additional theoretical mechanism which can explain how regions form. It is concluded that the strict bottom-up “historical process” of regionalization is not a rule and that a single-policy institution could be a seed for the process of creating a region independently – on any bottom-up or top-down perspective, even by stepping in “from the middle”. This conclusion results in a suggested theory that can be called the “Sectoral Regions Theory”.