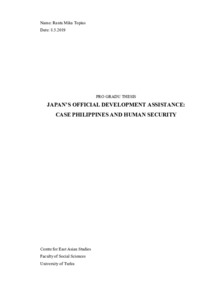 Through the initial exploration of the history of Japan‟s Official Development
Assistance program, this thesis has identified its distinct phases, influential actors,
norms, ideology and the philosophy behind it. Ever since the release of the original
Official Development Assistance Charter in 1992 and its subsequent revisions in 2003
and 2015, the program has gone through seemingly fundamental changes, the most
radical being, the adoption of human security as its guiding principle. Consequently, the
main research objective of this thesis is to initially, compare the values, basic policies
and goals of the 2015 Charter to the implementation of Japan‟s Official Development
Assistance program in the Philippines and to evaluate the degree of their alignment.
Secondly, the thesis has assessed what are the concrete manifestations of human
security in Japan-Philippines development cooperation. Due to the extensive history and
wide manifestations of Japan‟s development cooperation with the Philippines,
encompassing peacebuilding, infrastructure improvement and securitization among
other fields, the country provides an excellent focus of analysis. The research objectives
of this thesis have been achieved through the utilization of policy and frame analysis
concurrently. Subsequently, the analysis revealed alignments and misalignment between
the policy projections in the Charter and the implementation of Japan‟s Official
Development Assistance in the Philippines, as well as, unexpected observations
regarding the manifestations of human security. Most prominently, the research
discovered a conflict between the pacifism in the Charter and the de facto security and
defense cooperation through Japan‟s Official Development Assistance framework to the
Philippines. In addition, the thesis came to the conclusion that, Japan‟s peacebuilding
efforts in the conflict of Mindanao have been more aligned with proactive pacifism,
rather than human security, due to the lack of grassroots level individual security
approach. Moreover, the research has identified scaling issues in regards to the policy
projection and goals in the Charter, which may explain the continuing lack of a judicial
basis for the Charter. Consequently, the author suggests that the true purpose for the
Charter is to act as a statement of purpose for the international donor community,
instead of being a comprehensive foundational policy document.