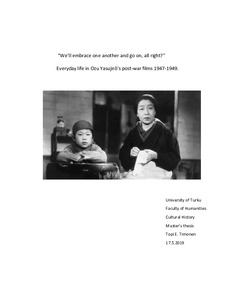 The subject of my master’s thesis is the depiction of everyday life in the post-war films of Japanese filmmaker Ozu Yasujirô (1903-1963). My primary sources are his three first post-war films: Record of a Tenement Gentleman (Nagaya shinshiroku, 1947), A Hen in the Wind (Kaze no naka no mendori, 1948) and Late Spring (Banshun, 1949). Ozu’s aim in his filmmaking was to depict the Japanese people, their society and their lives in a realistic fashion. My thesis offers a close reading of these films that focuses on the themes that are central in their everyday depiction. These themes include gender roles, poverty, children, nostalgia for the pre-war years, marital equality and the concept of arranged marriage, parenthood, and cultural juxtaposition between Japanese and American influences. The films were made under American censorship and I reflect upon this context while examining the presentation of the themes. My close reading combines methods from cultural history and film studies, whereas my position is that of a cultural historian.

I argue, that cinema affects the way people view themselves and their nation. By presenting Japanese society with certain cultural, societal and moral features the films also produce this kind of a national mentality. I found this to be especially true with the female depictions in the films. The films give their female protagonists new forms of freedom in different stages of life, for instance relating to the arrangement and the execution of the marriages. I found that through their narratives and characters the films campaign for a subtle reformation of the values within the Japanese family system, but also strive to ensure the continuance of this family culture. Preservation through transformation also becomes a central feature in the post-war national mentality and the Japanese-ness of the characters.