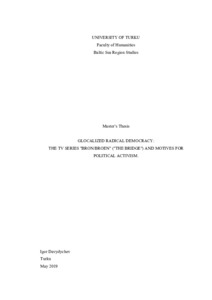 This thesis investigates what political theory ideas of activism / agency can be found the popular Swedish-Danish TV show “Bron/Broen” (“The Bridge”). Its Mexican-American (“The Bridge”) and French-British (“The Tunnel”) remakes are used as intertexts for this investigation. I offer a methodological framework for my analysis, building on the interpretivist methodologies of political science and the methods from TV studies. The main method is narrative analysis, that I apply to the show and its remakes.

I show how the TV series construct more unified cross-border spaces, by presenting the two nations in each case as being much closer to each other, than they probably are. I illustrate, how the show utilizes the narrative that initially presents the actions of the antagonist as being a dark form of social critique and then reveals them as the pursuit of own goals / agenda. This narrative device is then reused in each of the following seasons of the original show. The remakes also deploy it, adapting it to their local settings.

Eventually, present the two theoretical concepts, which I have dissected from the shows’ narrative. Firstly, the idea of Everyday Makers – people who bring about social change in the world around them through their everyday actions, even if they are being alone in this process. Secondly, I argue that the narrative gives us an example of the radical democracy model. The political arguments presented by the antagonists in each season of the shows are powered by their personal goals. They are a continuation of their identities, and the conflicts between them and their main victims / targets cannot be reconciled. This is essentially plurality of political identities, which is at the core of radical democracy, but applied to the grim settings of thriller TV drama. The successful application of the same narrative to other cross-border environments in the remakes makes this radical democracy glocalized.